I recently attended the 20th Congress of the International Association for the History of Glass conference in Fribourg, Switzerland and presented a poster on my research. I have included the text and and some of the original images  (due to copyright restrictions, some images have been replaced, see below for alternatives).

Although a history of glass in Britain begins in the Bronze Age, it is in the Iron Age (c. 800 BC – AD 43) that we find evidence for objects made of this material in increasing quantities. Glass objects in this period are mainly beads. In the past, studies have focused on typological and compositional analyses (Guido 1978, Henderson 1982), but this study aims to create a social understanding of the use of glass during this period. This poster will explore alternative approaches in early glass use in Britain and their implications for regional identities in the Iron Age. 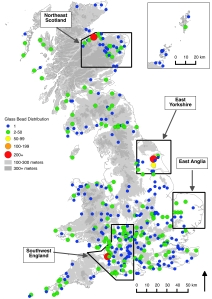 Four study regions were selected for comparison that encompass a wide variety of archaeological evidence (Figure 1). Data was obtained from catalogues (Guido 1978, Henderson 1982), research and commercial excavation reports, and information gained first hand through analysis of museum collections. Glass beads are not evenly distributed throughout Britain (Figure 2), which may be the result of a suite of factors discussed elsewhere (Foulds 2014). 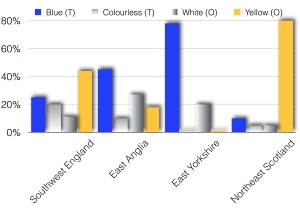 patterns are present (Figure 3). Blue and white are often combined, as are colourless and yellow (Figure 4*). Other colours are found in very small quantities and could be considered to be rare occurrences.

Dot and linear motifs are the main types of decoration found on these beads. Most dot motif

beads only have three dots created by layering two different colours, usually white and blue (Figure 5*). Large beads with dot motifs alternate in a 2-1-2 pattern (Figure 7). Linear designs exhibit a greater range of variability in both motif and colour (Figure 6*). Single wave/zig-zag beads are commonly found, but span the Iron Age and Roman periods. Spirals seem to be more distinctive to the Iron Age period. These analyses show that there were clear regional patterns, which suggest that they may have held important information when used or put on display in the Iron Age.

There are only a few instances where glass beads have been found within inhumations,

rendering it exceptionally difficult to understand how they were used. Were they all worn as necklaces or charms? Perhaps they were sewn into clothing? Or, used to adorn horses, or other animals? Could the largest examples have been used as spindle whorls? In the areas of study, there were 34 instances where glass beads were found in inhumations (Southwest England: 9; East Yorkshire: 25). Figure 8* shows some possible reconstructions.

Just as there are strong regional settlement and burial patterns for Iron Age Britain, there are also regional patterns in the glass beads and other  dress objects. This may indicate that dress was used to mark out different regional identities. However, there is a danger in assuming that glass beads were intrinsically high status. For example, while they may seem rare compared to other types of material culture (e.g. brooches and coins), the number of known glass beads is the product of not only different regional and chronological practices in the past, but also different recovery techniques and methods in the present. Yet, at Wetwang Slack, East Yorkshire (3rd-2nd century BC cemetery), only 17 out of 446 graves contained glass beads (assumed to be necklaces/bracelets) These individuals account for approximately 3.8% of the cemetery population, which further adds to the mystery of Iron Age glass beads in Britain.

This research would not have been possible without the extraordinary help from a number of people and organisations: Doctoral thesis supervisors: Dr Tom Moore, Prof Richard Hingley; Funding bodies: Rosemary Cramp Fund, Prehistoric Society, Association for the History of Glass; all of the museums and Historic Environment Offices I visited; and of course a whole host of individuals that suffered through all my questions and read through copious drafts of my thesis.

Guido, M., 1978. The Glass Beads of the Prehistoric and Roman Periods in Britain and Ireland, London: The Society of Antiquaries of London Report no. 35.

*Images could not be included: