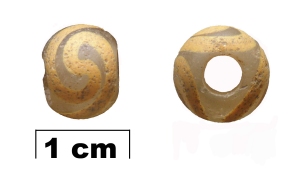 An Iron Age glass bead was discovered in an enclosure ditch during the 2013 excavations at Caerau Hillfort. Although unique in design, it bears many similarities to the glass beads from Meare Lake Village in Somerset, which suggests an Iron Age date of 300 – 50 BC. This suggests a general pre-Roman date for the bead (the specific date of manufacture is unclear), however, the ditch layer it was recovered from was on top of a layer containing probable 1st century AD pottery fragments. This isn’t too unusual, as other ‘typical’ Iron Age glass beads have been found in Roman contexts, such as at Blagdon Park 1 (Hodgson, McKelvey et al. 2012) and South Shields Roman fort (Allason-Jones & Miket 1984). Typical Iron Age glass beads found in Roman period contexts highlights the fact that many of these stayed in use, possibly for hundreds of years before they finally entered the archaeological record.

The Caerau bead is globular (nearly spherical) in shape, measuring 10.2mm in diameter and 8.2mm in height. The bead was formed with colourless glass and a trailed decoration of opaque yellow glass was applied, which creates the continuous spiral decoration that runs along the circumference of the bead. Overall, it is in very good condition and only exhibits a minor amount of weathering that has resulted in a slightly dull surface. It is nearly complete barring the small chip near the perforation, which is probably modern rather than an ancient break (the chipped area appears un-weathered).

The decoration on this bead is not a pattern that is often found on other beads of Iron Age date. The only comparable bead is a find from Meare Lake Village in Somerset (Bulleid & Gray 1966), but it is made from blue glass with an opaque white spiral decoration (G15), which is also unusual. The majority of beads made from colourless and opaque yellow glass have either a non-continuous spiral or herringbone design. There are other examples with different designs, although there are very few examples of each pattern. Overall, the Caerau bead fits in comfortably with these beads.

It is not unusual to find single Iron Age glass beads, rather than as a larger composite object, such as a bracelet or necklace. Unfortunately, this leaves us with little information about how they were used and why they were in the archaeological record. This bead was clearly unbroken, so it is unlikely it was cast aside because it could no longer be used. It may be that it was accidentally lost, or perhaps intentionally placed in the ditch. Another possible explanation could be that it was intentionally discarded because it was no longer wanted.